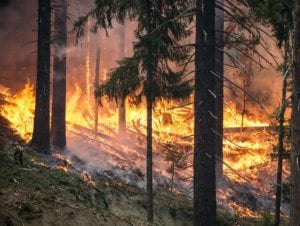 A teenager, through whose fault a forest fire has arisen, must pay damages. Last September, a 15-year-old boy from Vancouver, Washington, organized a firework in the forest on a hot autumn day. As a result, a massive fire broke out, destroying vegetation on an area of ​​48,000 acres in the National Forest Reserve Mount Hood and along the Columbia River. This year, a teenager whose name is not called, pleaded guilty and even wrote a letter in which he asked for forgiveness for his “reckless actions.”

But this did not help to soften the verdict. At a recent court hearing, he was ordered to pay a large compensation amounting to $ 36,631,687.10 to various agencies, including the Federal Forestry Administration. And although the adolescent’s lawyer tried to prove that such a verdict was “a cruel and unusual punishment,” the judge in charge of the case disagreed with him and ordered the department for juvenile delinquents to draw up a payment schedule. In addition to the fine, the teenager will also have to work 2000 hours on public works.

But in the verdict there is an item that can partially alleviate the fate of the culprit of the fire. The court can find “satisfied” the claims of various departments for compensation if the teenager within the next 10 years will make available payments for him and will not commit any unlawful actions.