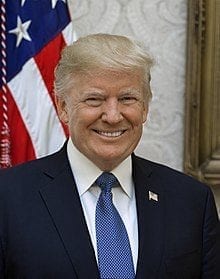 The law obliging to postpone the portrait of Trump in post offices, will be presented to the Congress.

In each branch of the US Postal Service, photographs of the incumbent president Donald Trump and Vice President Mike Pence must be posted, a member of the House of Representatives, Dan Donovan, is convinced. The congressman intends to submit a corresponding bill to the parliament in the near future.

The idea of ​​this bill came to Donovan after the appeal of one of the residents of Staten Island, who said that portraits of the previous US leader Barack Obama and former vice president Joe Biden still hang in the local post office.

Dan Donovan has been representing Staten Island in the Congress since 2015, when his predecessor, Republican Michael Grimm, received a deadline for organizing fraudulent schemes for non-payment of taxes. By the way, Grimm, who previously worked in the FBI, plans to run for Congress again.

Most Republicans supported Donovan’s initiative, wanting to defeat the Democrats, who sought to win a seat in the House of Representatives. Donovan himself considers that “the former criminal” will not be able to bypass him in the upcoming elections.